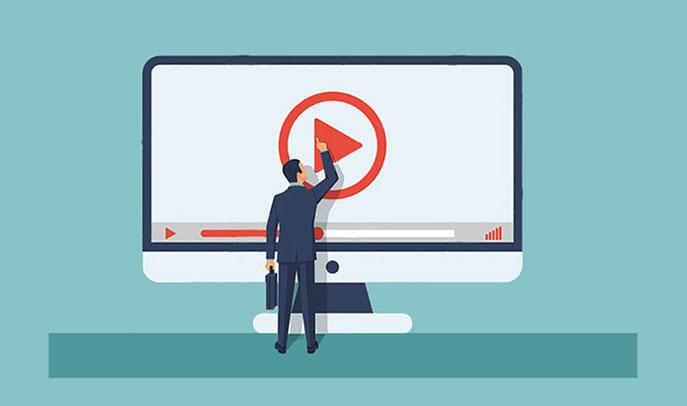 What is Video CDN? The Top 10 Video CDN Providers

While the rising popularity of video streaming as a whole has been rather obvious for several years now, the worldwide change to remote work and general isolation for health purposes has led to a lot more video content being consumed on a regular basis, among other things.

As a direct consequence, video CDN services have become far more relevant than ever before, to ensure that the end users have the best experience with their video-on-demand (VOD) or live streaming content – including latency, buffering, and so on.

The definition of CDN

A CDN – Content Delivery Network – is a group of servers (connected to a single network) that is used to provide faster content delivery over the Internet, while being geographically distributed. A CDN is widely used to solve one of the biggest issues of the content delivery all over the globe – latency.

Latency is the time between a user requesting a specific piece of content, and the content’s origin to send this piece of content to the user. A distance is quite crucial in this case because it’s not uncommon for data to travel thousands of kilometers from the server to the user, making latency quite a massive problem.

The main purpose of a CDN is to resolve that, offering a wide net of servers that can “cache” the content you’re looking for on a server that is much closer to your location than the original content’s location. While CDN is widely used for all kinds of content, video streaming probably needs it the most right now, which is why there are so many different video content delivery network services on the market right now.

Benefits of using a CDN

The reason we’ve mentioned above is not the only benefit of using a CDN, in general, but it’s one of the several different ones. Here are some of the biggest reasons for services to use video CDN solutions:

Necessary features for a video CDN on the market

If we’re talking about video content delivery networks, specifically, there are several features that any service in this field has to have – since we’re talking not just about video-on-demand (VOD) services, but also live streaming services that require a lot more effort in terms of latency and delivery speed. Here are some of the biggest prerequisites for any decent video CDN on the market:

While talking about abstract advantages and benefits of video CDN services is easy, examples are also needed in situations like this one. Which is why we’re presenting our list of top 10 video CDN providers below: 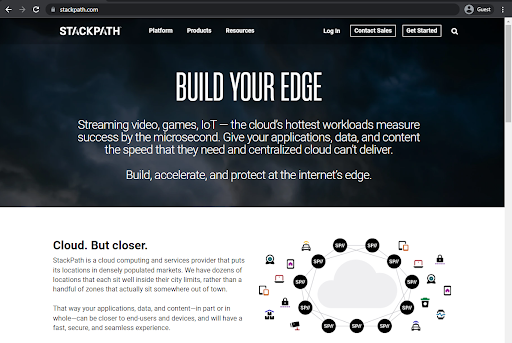 HighWinds is a rather old global CDN that has been around since 2002, and was quite successful in providing CDN services to many different businesses and platforms. It has 52 different points of presence on several different continents and can offer high performance, low latency and a number of useful technologies like new routing methods, file system control, and so on. 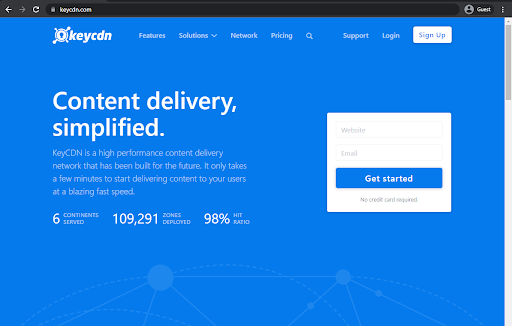 Another example of a rather powerful CDN service is KeyCDN – a solution from Switzerland that offers 24 points of presence in different countries, covers six continents and has over 93,000 deployment zones. It is at its finest when working with video content and streaming, but it can also work with other types of media, such as photos, website data, etc. There are also various security features, little to no latency, a direct API access, and many other features that customers might find useful. 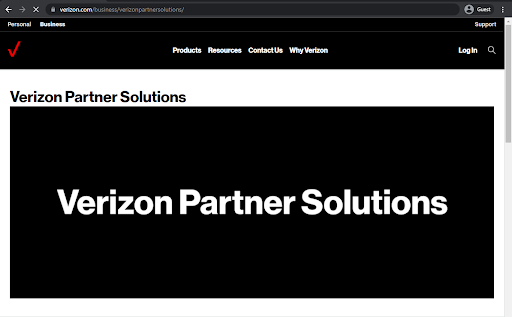 Bearing the name of the all-known American conglomerate, Verizon Digital Media Services is a premium CDN service for different use cases. It was created after the acquisition of EdgeCast, and still offers an impressive level of network quality for all five continents. Verizon offers over 95 points of presence, over 3000 connections and a top bandwidth of 24 Tb/s, ensuring that there’s no streaming service or enterprise website that would not be satisfied with the results. 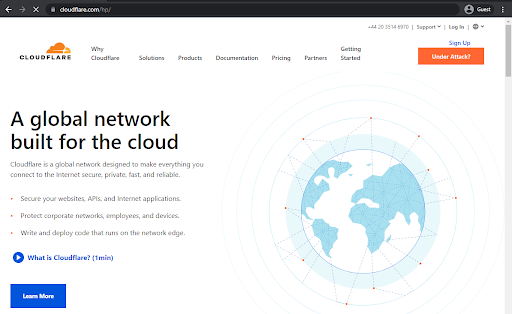 While not the biggest CDN provider on the market, Cloudflare is considered one of the most promising, with a relatively even spread of points of presence all over the world, as well as HTML5 support, API access, and more. Cloudflare also supports a number of different settings like caching types, to make sure that the user can customize their CDN in any way they want, without paying extra for it. 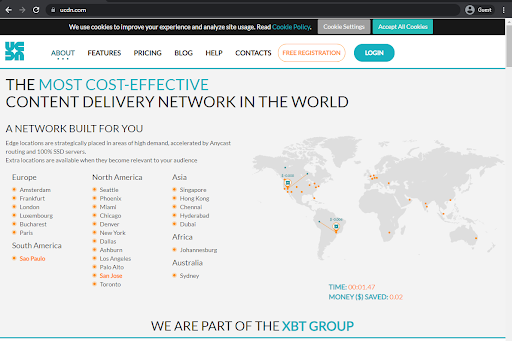 Not all of the video CDN services have to support content delivery over the entire planet – UCDN is a good example of that, offering a rather small-scale solution that offers CDN services mostly centered around either Europe or the USA. It has about 13 points of presence but promises a massive speed and low latency for each and every one of them. Since it is a rather small solution in comparison with some other players, the average price for such a service is lower than with a lot of competitors, too. 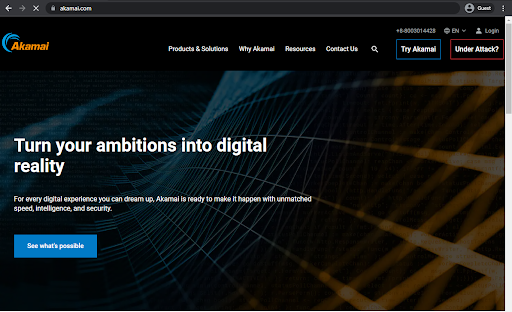 As one of the biggest CDN services on the market (and one of the oldest ones), Akamai is still a force to be reckoned with, offering over 240,000 servers all over the world (130+ countries). Akamai has all of the features we’ve mentioned as a requirement for a good video CDN provider – VOD and live streaming support, extensive analytics, as well as various privacy settings, support for a variety of codecs, and more.

Going for another one of the older CDNs on the market, AHCDN has been around for more than 15 years and still delivers a great service for both Europe and USA regions. It’s a great service with more than a dozen points of presence, a relatively low overall price for the market, and the reliability in the form of many popular companies already working with AHCDN. 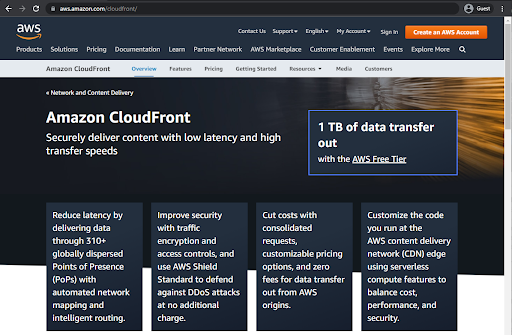 CDN is a market that has its own share of technological mastodons as competition – for example, CloudFront is one such case, since it is a CDN solution offered by the AWS (Amazon Web Services) division. Its server network is rather large as a whole, with a decent coverage not just for Europe and USA, but also Asia and South America. It supports pretty much all kinds of content delivery, including live streaming, video on demand, as well as other media types. 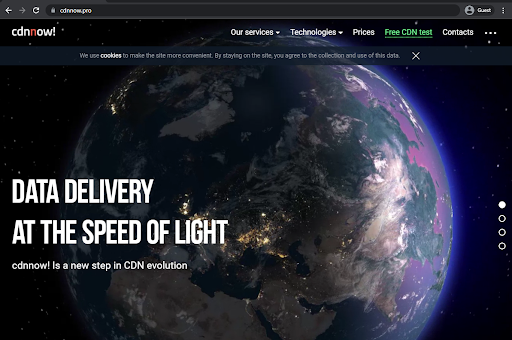 CDNNOW is one of these services that focus primarily in one area – Russian Federation and a CIS region – but still have additional servers in both Europe and USA for a more stable coverage for most of the planet. There are over 20 different points of presence all over the globe, and the peak bandwidth is also quite impressive for an almost global coverage of your business or service. 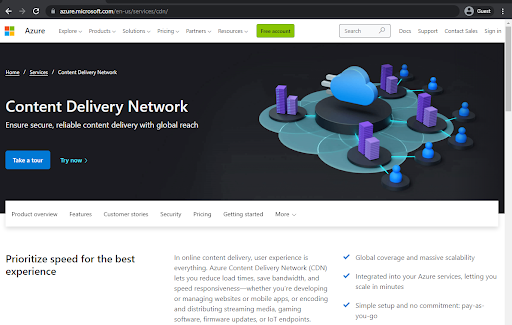 Another example of a tech giant being a competition in this particular field is Microsoft, offering its Azure CDN services with a variety of advantages – including global coverage, high capacity delivery, various security options, and so on. It is highly scalable, can be integrated into other Azure services, offers API access and even the ability to integrate with other CDN services in the field.

The competition on the CDN market is as high as ever, and you can see that there are many different solutions available – both big and small. There’s also another important point that we did not really touch here, and that is the price of these solutions. The truth is, the price for a CDN might vary quite a lot depending on the circumstances, including the target usage, the geographical location, and so on.

However, solutions like SpaceCDN can help you with that. SpaceCDN is a CDN reseller that supports five different CDN providers (UCDN, AhCDN, CDNnow, HighWinds and Verizon) and can help with choosing the CDN that you need for your specific use case, including your target bandwidth, target region, and so on.