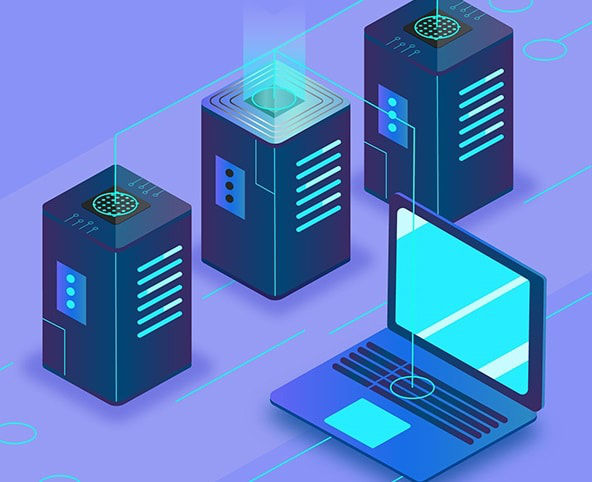 The definition of CDN hosting

Content delivery is the core purpose of CDNs, and they are used all over the internet to deliver content to people from around the globe. Content Delivery (Distribution) Networks can be used in online shopping, video streaming, social media browsing, and so on, and so forth.

CDN is a distributed network of servers that stores the same data multiple times and can deliver it to users to any location on the planet – CDN servers can cache all kinds of text files, script files, images, CSS, etc. The main goal of a CDN is to decrease the latency of the content delivered to the end user – this is how CDN differs from the traditional hosting method.

Traditional (web) hosting has been a staple of the Internet for many years, especially when there were only several hosting companies in the whole world, and the websites themselves were mostly static and did not really need to work with anything heavier than images or small files.

However, these times are long gone now, and it would be downright impossible for traditional web hosting to survive in the current world of multimedia content that gets stored and shared from pretty much any website – not without help. This is where CDN hosting comes in.

CDN hosting is widely used all over the planet to deliver massive amounts of content to end users with little latency and high performance – CDN’s network of distributed servers helps a lot with this. In fact, there are several differences between traditional web hosting and modern CDN hosting as services:

While decreased latency can be considered the main benefit of CDN hosting, there are also other important factors, such as:

CDN hosting is pretty much a necessity in the modern day, and there are multiple different options to choose from. Below you’ll see our take at top 10 CDN hosting services – including both hosting services as a whole, as well as purely CDN services:

In the ever-growing world of content, “unlimited” features such as bandwidth or storage have quickly become a rare sight for most of the users. However, hosting services like Hostinger still stand by this policy, offering an unlimited number of databases, websites, subdomains, unlimited storage capacity, and so on. It’s mostly aimed at the lower end of the hosting spectrum, targeting more regular users and less companies, with >$3 per month for a single website, which is a great deal for pretty much anyone. It is also a solution that has many features, from WordPress management and CDN services to regular backups and dedicated IP addresses. 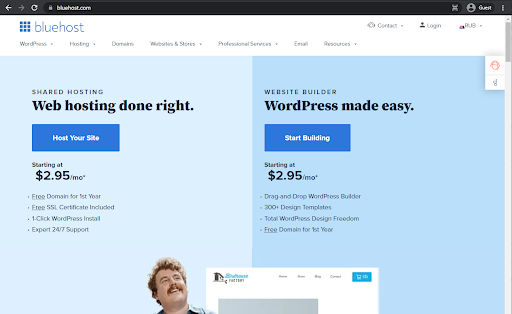 Surprisingly enough, CDN hosting is not a feature that is only available to large enterprises with budgets to spare – it’s not uncommon for a hosting service to offer an abundance of features for an impressively small cost. Bluehost is one such service, offering a reliable and effective hosting service that includes an abundance of features, such as Weebly site builder, WordPress official endorsement, and Cloudflare CDN. It also has a highly-endorsed customer support system and a user-friendly set of tools for general administration tasks. 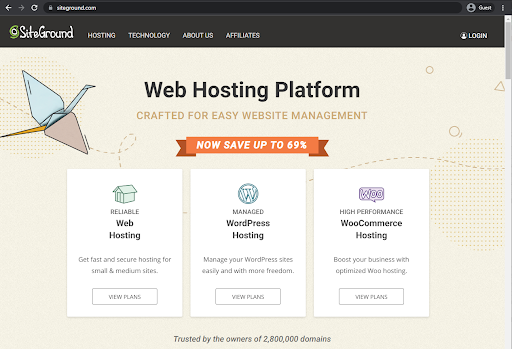 When it comes to a modern hosting service, it’s hard to imagine a set of features better than what SiteGround has to offer. It is a solution that has all kinds of hosting services and features included, such as VPS hosting, CDN hosting, web hosting, MySQL database management, and so on. Their UI is built with cPanel, offering SSH access, daily backups, their own website optimization system (SuperCacher), and more. SiteGround is also famous for their customer support that strives to achieve the highest customer satisfaction rates, building the company’s reputation as one of the best hosting markets to offer. 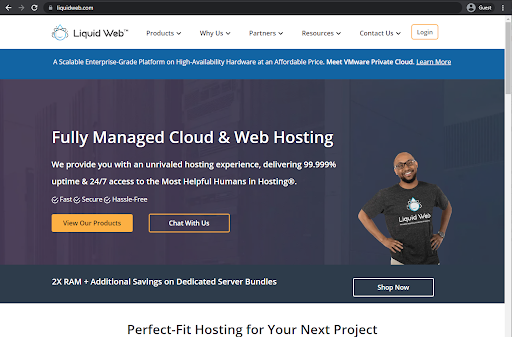 Cloud hosting is one of the areas that CDN often gets confused for, despite the fact that these are not the same – in fact, cloud hosting and CDN can also coexist within the same service. LiquidWeb is a good example of that, offering a combination of powerful hardware and cloud flexibility in their solution. LiquidWeb has four different datacenters that you can use to host your data, and there’s also a large list of features attached, such as a built-in Cloudflare CDN, high reliability, regular backups, DDoS protection and a fast customer support that is available at all times. 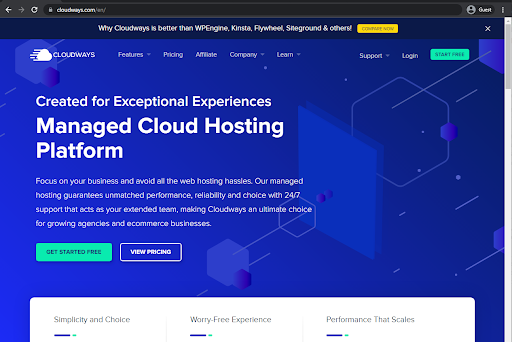 Another great showcase of how cloud services can work with CDNs is Cloudways – a cloud hosting service that offers cloud infrastructure of Google, AWS, Vultr, Linode or Digital Ocean and does not have its own cloud hardware. But don’t let that dissuade you, because Cloudways is still a great option with custom control panel, a scalable infrastructure, a built-in CDN, free SSL certificates, real-time monitoring, and so on. Cloudways is great for medium to large companies, offering the ability to manage multiple projects, collaborate with different users, manage each user’s permissions, and so on.

As you may have noticed, all of the examples above are regular hosting services with CDN support or with a CDN built in the system itself. However, it is a common knowledge that there are also multiple different CDN networks in the world that can host everything on their own, such as: 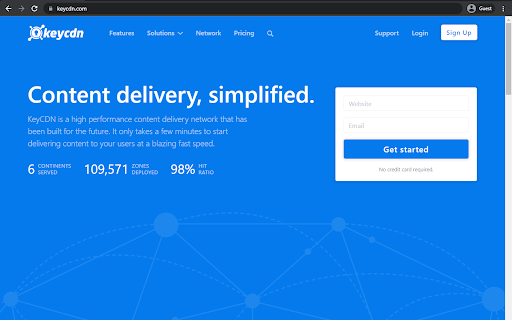 Starting with a relatively small solution, KeyCDN is a network that offers the combination of high performance and multiple flexibility options. It has data centers in 25 different countries, offers 100% SSD coverage and can compress images with its own Optimus plugin. Their payment model is defined as “pay-as-you-go”, meaning that you basically pay for the amount of traffic consumed – which is why it is a solution more suitable for smaller companies, since planning around this kind of approach with a large enterprise is rather difficult. 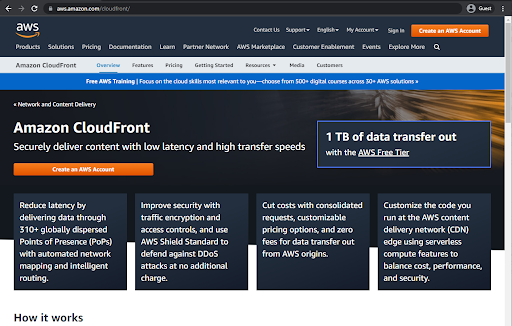 It is rather hard to form a list of global CDNs without mentioning Amazon and their CloudFront service. It offers a massive number of features and still deserves its place as one of the most effective cloud networks in the world, with servers in 29 different countries, a developer-friendly environment, high speed and low latency. It can also integrate with other Amazon services, which allows for the introduction of load balancing, DDoS protection, custom code functions, etc. While it does have a free version, it is pretty much exclusive to regular customers (50 GB of data and 2 million HTTPS requests per month), and the paid version is sometimes hard to calculate due to its inconsistent pricing within a pay-as-you-go model that we’ve described above. 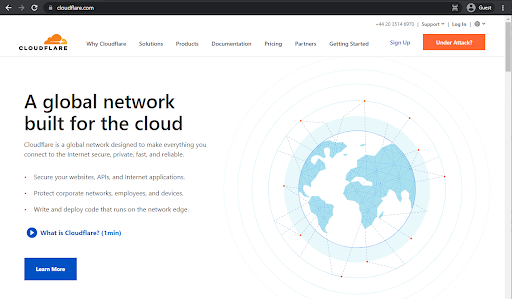 It is rather hard to talk about the Cloudflare CDN when pretty much every hosting service out there offers it as one of its options – which is a mark of quality on its own. Cloudflare’s network is truly massive, covering 81 different countries, and it can also optimize performance for the user’s device, reduce image file sizes, protect against DDos, and so on. Despite the fact that there is a free tier, most of the more complex features mentioned above are only available for paid subscribers – and it’s still a great service to pay for, proven by millions of customers all over the world. 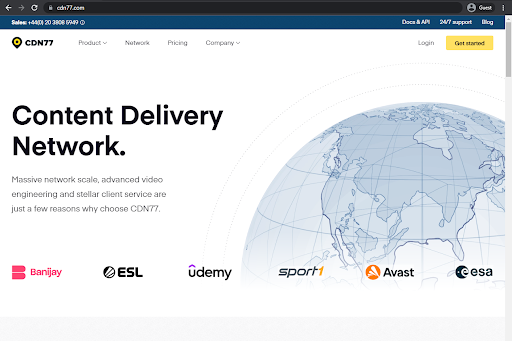 While competing with giants like Cloudflare in terms of sheer server numbers seems impossible, it’s still a viable option to try and attract customers with other features – which is what CDN77 does, offering API management, CMS integrations, easy video content delivery, and two different payment models (pay-as-you-go and a fixed price per month). CDN77 also strives to be at the forefront of innovation, which is why they were the first to offer Brotli compression and HTTP/2 back in 2016. As for their achievements, at some point CDN77 was used to deliver images from the Hubble Space Telescope to scientists all over the world. 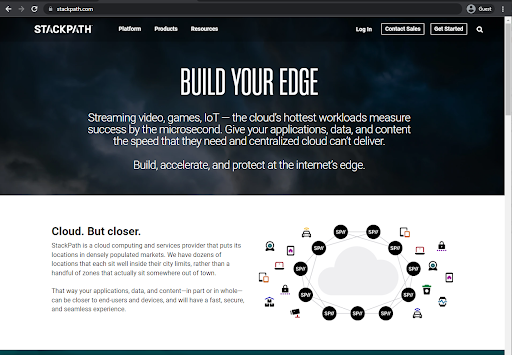 The last, but not the least, competitor on this list is StackPath – a great combination of speed, security and a satisfying user experience. It offers website acceleration, as well as better caching controls – with the help of instant purging and intelligent caching. It also has a free trial, as well as a fixed-price subscription model, with private SSL certificates, DDoS protection and unlimited numbers of website requests included in the package.

CDN hosting is a great service that works in tandem with traditional hosting to make it faster and easier to access content from any part of the world. As you can see, there are many different solutions on the market, too – both in terms of strictly CDN services, and in terms of feature-rich hosting solutions.